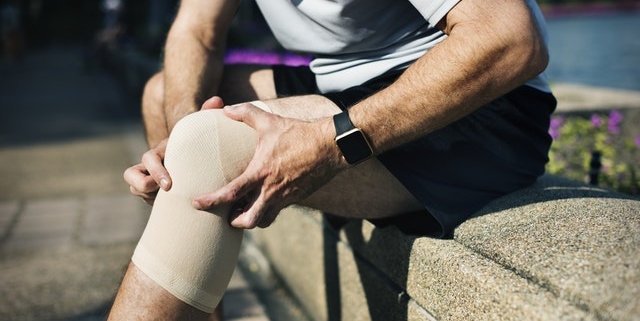 Tony’s story
My introduction to the Limb Reconstruction Unit came as a result of a medical accident. Over a period of two or three years I had had continual knee problems, largely as a result of sports injuries. In 1999, at the age of 47, it was suggested that I should have an upper tibial osteotomy operation. The cartilage in my left knee was breaking up and the operation would straighten the leg and remove the pressure, I would be able to play tennis again and continue to cycle.
In November that year, an orthopaedic surgeon in Kent preformed the operation. It require a cut to the tibia and fibula, but rather more happened. The tibia and fibula were cut right through and the deep peroneal nerve was severed. I left hospital with a leg that could swing from left to right, and a drop foot.
After several months of painful physiotherapy my physiotherapist insisted I got a second opinion. This is when I discovered to my horror that I had a very unstable disunited fracture of the tibia and fibula. If the limb could not be reconstructed I would need amputation. I was referred to Mr Graeme Groom at King’s College Hospital.
An Ilizarov frame was put on to my leg. After four months it was removed, the tibia and fibula had reunited and I had recovered some nerve sensation, which restored dorsiflexion to my foot. Some follow-on complications were resolved and two years after I entered hospital for the initial botched operation, I was able to return to work.
Although I can no longer play sport, mainly because of the peroneal nerve, not to mention advancing years and girth, I have been able to resume swimming and cycling.
The unit is doing fine work and I am proud to be a Founder Trustee and Deputy Chair of this charity.


This website has information for anyone considering, or going through, limb reconstruction surgery. However we cannot provide opinions on treatment. If you require more information but are not a patient of King’s College Hospital, you should contact your own medical team for advice.

Getting married with a Meccano set on my leg